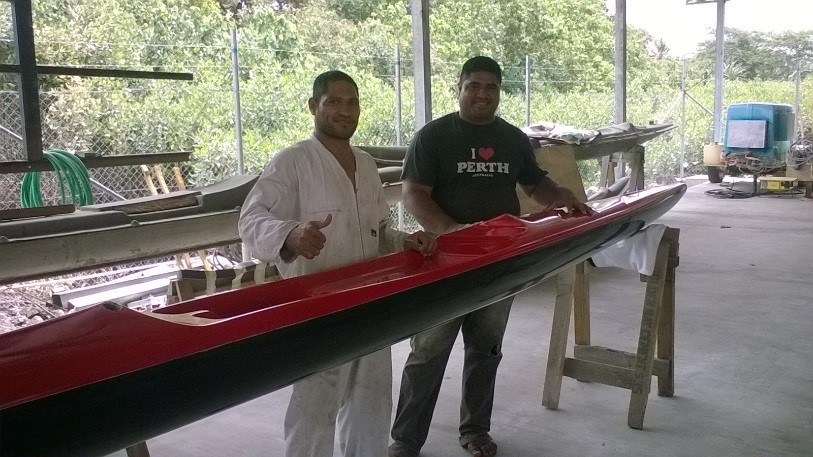 When I first moved to Samoa it was all about doing nothing for as long as possible and for me that was only 12 months. Building canoes or opening a café have both been in the back of my mind ever since I started paddling but I always thought it was a stretch to far but now they are both a reality. Jay Schuster a successful local paddler and businessman in Samoa approached me about 6 months ago to help with a project that he was planning, which was to bring a canoe builder from Hawaii all the way to Samoa to build boats. My first questions were obviously, “how, why and when” which were quickly answered with, “I already have found the boat builder and moved him here, Samoa needs boats and come with me as we start now”. That was when I realized Jay only does things 110% and a lot of his drive comes for his passion for the sport of paddling. We haven’t confirmed the business name yet but our aim to have the launch of the new venture by the end of November.

The factory is based in down town Apia and we have original designs by Papu Williams a Hawaii/Samoan Canoe builder who had been on Big Island Hawaii building and working with some of the biggest names in the sport.

Our aim is not just to build canoes but to create a new industry in Samoa for export and offer opportunities for a new skill set for the local population. Don’t forget Samoa is still classed as under developed nation and you can be assured the proceeds from canoes sold are going straight back into developing not only the sport but a whole new trade right here in Samoa.

The canoe has been designed to fit into a 20ft container and the rocker designed for the water conditions. Our aim is to have something that is suited to all round conditions, but looks good a well.

Obviously we cannot do this alone and having the right partner in Australia was a vital piece of the puzzle. Steve and his crew at Paddle Shop Australia have joined us in this venture and will be our sole agent with the aim to releasing the canoe into Australia by the AOCRA OC1 national titles in December. So stay tuned to the blog for exclusive images and updates of the only Samoan built OC1 heading for Australia.

Till the next update

The Paddleshop launched their new site in July 2015 with new areas for events, event…

Need some advice? Call us today to arrange a demo paddle or ask about the range of products on offer for all levels of paddler.
(07) 5438 8211
Copyright © 2022 The Paddleshop - All Rights Reserved | Site by Active WebITS
Back To Top

Turn too much into too easy.

Right when you need it – Payright

We want to ensure you have a positive payment experience and have made the checkout process simple. We take responsible lending seriously so credit is only extended to approved customers. Please ensure you read the terms and conditionsfor further information and note that PayRight is not available on all purchases.