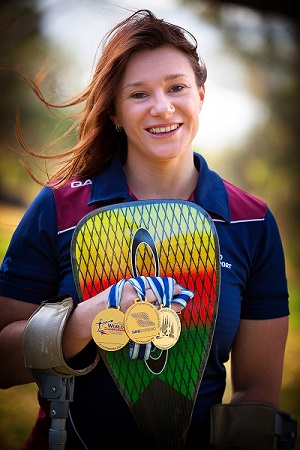 The year post Paralympics is said to be a bit flat. It’s hard to follow up the dizzying heights of the Paralympic experience and winning a medal at the debut of your sport. Nevertheless, 2017 kicked off on a high, with 6 Gold medals at the National Canoe Sprint Championships in Penrith, and selection onto my fourth Australian Paracanoe Team.

The Australian Paracanoe team finished on top of the medal tally with 4 Golds followed by Great Britain, and Ukraine. Curt McGrath dominated with a golden double, winning the KL2 Men (single kayak) and VL2 Men (single Va’a). AJ Reynolds reclaimed the Gold in the KL3 Women, and I contributed to the medal haul with a win in the VL2 Women (my 3rd world title in this event).

The senior team also made some lofty achievements last year, with the K4 men victorious over 1000m, and an outstanding performance by Alyce Burnett, leading from start to finish, to take out the K1 Women 1000m. This year the focus will be on Montemor O Velho, in Portugal in August, for the ICF World Canoe Sprint Championships.

Another highlight of 2017, was winning the Queensland Canoeing Canoeist of the Year Award. It was an absolute honour to have my achievements recognised in this way. As I was overseas at the time of the awards night, I received the trophy later at the Queensland State Marathon Titles, where I made an unforgettable (for all the wrong reasons) debut in the TK2 12km.

After very limited training time with my TK2 partner, James Pittman, we managed to sink our boat shortly after the start of our 12km race. Salvaging the wreckage, we finished the race in last place but with some fond memories and laughs along the way.

There are many events I’m looking forward to in 2018, including the IVF Outrigger Canoe Sprint World Championships in Tahiti, where I am hoping to race in team and individual (para and able-bodied) events. The potential of being the World Champion in both ICF and IVF is a great motivating factor and would be a wonderful accomplishment.

The recent announcement of Va’a (single outrigger canoe) events added to Paralympic program in Tokyo 2020 will see increased participation and more interest in Va’a racing throughout the world.  In 2018 I will also be representing the spirit of the Commonwealth Games by participating in the Queen’s Baton Relay, carrying the baton on March 29th in the City of Ipswich.

I want to say a huge THANK YOU to The Paddle Shop for their support over the last year and looking forward to working with you in the new year! Wishing you all a successful and joyous 2018 with plenty of paddling ahead!

Dave crook fighting a flu so I took the opportunity to paddle the V11 today.…

Need some advice? Call us today to arrange a demo paddle or ask about the range of products on offer for all levels of paddler.
(07) 5438 8211
Copyright © 2020 The Paddleshop - All Rights Reserved | Site by Active WebITS
Back To Top
×

Turn too much into too easy.

Right when you need it – Payright

We want to ensure you have a positive payment experience and have made the checkout process simple. We take responsible lending seriously so credit is only extended to approved customers. Please ensure you read the terms and conditionsfor further information and note that PayRight is not available on all purchases.